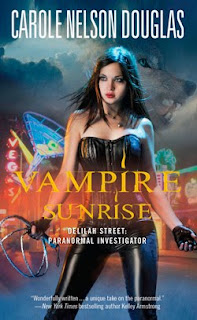 In a supernatural society only the strong survive.
Delilah Street is a paranormal investigator in post-Millennium Revelation Las Vegas.  After the twenty-first century, all of the bogeymen of myth and legend came out of the dark and blended into human society.  Delilah makes sure the werewolves, vampires, zombies and other monsters leave the innocent alone.
Ricardo "Ric" Montoya is a sexy ex-FBI agent and Delilah's lover and partner.  However, in a recent battle, Ric was the victim of an ancient Egyptian Vampire's empire suckfest.  They wanted to know Ric's secret for raising the dead.  Delilah finds a way to heal Ric, who ended up alive but comatose, but at someone else's expense.
Now, Delilah and Ric are back investigating even more paranormal secrets.  But Delilah and Ric have a few secrets of their own.  With Delilah accepting a Brimstone Kiss and Ric's attack, they have been given new abilities.  They will need to learn how to use them quickly if they hope to defeat evil ancient gods.
VAMPIRE SUNRISE is a fun paranormal romp of epic proportions.  Delilah and Ric's love for one another leaps from the pages, as well as, all sorts of scary creatures.  Ms. Douglas does an impeccable job of world-building and balancing mystery, romance and humor.  Fascinating and scary, paranormal and urban fantasy lovers alike will love Delilah Street.
*courtesy of RJ