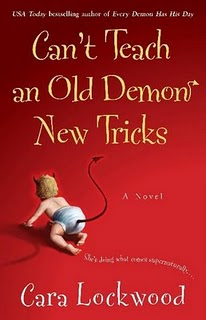 When you're married to a demon but attracted to an angel, sparks will fly.
Sam is a fallen angel.  He refuses to work for the devil and he had his wings plucked viciously from him when he worked for God; he refused to kill a young mother and her dying son.  Now he works freelance and so far has been able to resist Satan’s offer of immortality and eternal servitude.  But Sam isn’t sure how much longer he can remain neutral.
Rachel Farnsworth used to be happy.  Now, her husband Kevin is missing and on the day of their son Cassidy’s birthday.  She’s tried calling his work and a few friends, but no one has seen him.  She’s also sure something is wrong with Cassidy.  No child should be able to climb on top of a refrigerator or create small fires out of nothing.  She’s scared for him, and when she finds out that Kevin cleared out their bank account, she’s stunned.
A demon named Pan had taken over Kevin’s body a few years ago.  He knows the location of fallen angel Azazel’s tomb and Satan wants that information.  He’s been hiding for years but now he’s being hunted.  He and another powerful demon unleash dark forces upon Dogwood County while Sam and Rachel work together to find the answers to stop it.
The attraction between Sam and Rachel sparkles.  CAN’T TEACH AN OLD DEMON NEW TRICKS is written with wit, a supernatural fun plot, and extraordinary characters.  Cara Lockwood has built a unique world of angels and demons with Dogwood County smack in the middle.  I look forward to more in this superb series.
You can pre-order your copy now!
Posted by Minding Spot at 10:19 PM