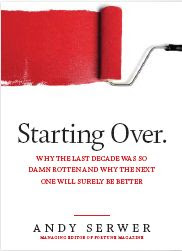 Starting Over: Why The Last Decade Was So Damn Rotten and Why the Next one Will Surely Be Better.

The Decade From hell, or the Reckoning, or the Decade of Broken Dreams, or the Lost Decade, they all seem more than appropriate.

I believe the author hit the nail on the head with the above statement.  This little book opens with the big headlines of each year, 2000 - 2009.  I found myself shaking my head as the news brought back memories of that time in my life - and hardly any of it was good! A Presidental Election that has to be determined by the Supreme Court, murders, Saddam Hussain, Iraq, Hurricane Katrina, the list goes on and on ending with last years highest unemployment rate in ages, not to mention some of the biggest corporations claiming bankruptcy.  Of course we want the next decade to be better!

STARTING OVER then goes into who is to blame? Basically ourselves.  We live with rose colored glasses on.  We see what we want to see and what will affect us, we don't live outside of the box.  American's want to "live the dream".   "Why do what we can put off untli the first decade of the 21st century?"  The book covers alot of material in such a small book.  It's not my usual book to pick up and read, but when I did, I didn't put it down until I was finished with it.   It's optimistic as well as highlights points we can go forward with and hopefully improve within the next decade.  Andy Server does an amazing job of showing us tragic events but what we can do to bounce back.  It's very easy reading that will speak to you.


I'm giving my copy to a lucky reader!  Please leave a comment with your email.   USA Only.
Winner will be announced on March 22nd.
Posted by Minding Spot at 6:58 PM