A Little Death In Dixie by Lisa Turner 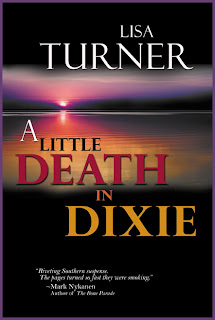 Sophia Dupree is a drunk, well-known around the precinct for her lush and careless ways.  So, when she is reported missing, everyone thinks she may have just walked away.  But Detective Billy Able had a fling with Sophia years ago, and still in love with her, decides to investigate.  Something just doesn't seem right.

Billy's partner, Lou, has been acting really strange lately.  Abusive and violent behavior that just isn't like him.  Recently divorced, he seems to have spun into a cycle of depression.  Billy fears he may be drinking again, and when Lou pulls a gun on him at a crime scene, Billy decides to let Lou cool down before approaching him.

Mercy Snow, baker extraordinaire, is called to Memphis at the behest of her sister Sophia for a weekend visit.  Mercy isn't close to her sister or her mom Gloria, but decides a visit couldn't hurt.  Mercy was scarred on her face as a child and has always been self-conscious.  She knows her mom favors Sophia, but tries not to let it get to her.  But when she arrives and find Sophia is missing, Mercy wants to help the nice detective find her sister.

Then, Judge Overton seems to be cozying up to Mercy's mom, in fact , they say they are to be married.  Mercy doesn't care for the Judge's controlling ways, and how he seems to implicate himself into every decision.  When Sophia's husband is called home, T. Wayne, he is the immediate suspect.  Mercy may desire Detective Able  but she cannot abide the fact he suspects her loving brother-in-law.

The clues pile up and Billy finds himself embroiled in several investigations at once.  But the trails keep sliding into one another.  As the secrets unfold, the bodies pile up.  Billy begins to realize he didn't know some folks as well as he should have.  And when more secrets are revealed, it could cost him a potential relationship with the lovely Mercy.

Edge-of-your-seat suspense, a clever and twisting plot, and complex and realistic characters set the scene for this compelling mystery.  I was entranced in the lives of these characters and as more secrets were revealed, the more shocked I became.  Lisa Turner does a masterful job of leading the reader through the investigations and unravelling one shocking truth after another.  I was mesmerized and I absolutely loved this book.  I would love to see another Detective Billy Able book in the future.  Top-notch!