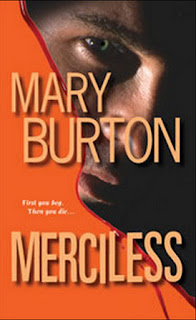 Description: Each skeleton is flawless - gleaming white and perfectly preserved, a testament to his skill. Every scrap of flesh has been removed to reveal the glistening bone beneath. And the collection is growing. When bleached human bones are identified as belonging to a former patient of Dr. Dillon Dixon, Detective Malcolm Kier suspects the worst. Dixon was recently acquitted of attempted murder, thanks to defence attorney Angie Carlson. But as the body count rises, Kier is convinced that Angie is now the target of a brutal, brilliant psychopath. Angie is no stranger to the dark side of human nature. But nothing has prepared her for the decades-long legacy of madness and murder about to be revealed - or a killer ready to claim her as his ultimate trophy.

Merciless is the highly anticipated sequel to Senseless, which came out in January and I reviewed here on Minding Spot.

Angie Carlson, known as the Barracuda, for her no-nonsense defence lawyer tactics, is still feeling guilty for getting Dr. James Dixon off for allegedly raping a prostitute.  Detective Malcolm Kier can't stand her for what she did; he knew Dr. Dixon was guilty.

But when bleached bones turn up on a picnic table, Detectives Kier and Garrison are on the case.  The bones are bleached white, stripped of muscle and skin; the work of a sadistic killer.  When one of the victims turns out to be one of Angie's clients, she decides to help the detectives out.

Working together, Angie and Malcolm's feelings towards one another begin to change, and move into a more sensual direction.  Is Dixon responsible for the brutal murders? Will Angie and Malcolm be able to make their relationship work? When Angie seems to become the target for the killer, the ultimate kill, all the stakes rise.

Mary Burton is a master of writing thrillers.  Merciless is the perfect ending to the two book story arc.  It can be read alone, but the reader will gain much more character background if they read Senseless first.  Exceptional writing, superb characters,  edge-of-your-seat suspense that will send chills up your spine, and a passionate romance all mold together into a stellar good read!