The Imperfect Enjoyment by Dewan Gibson 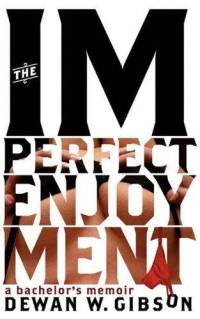 When college instructor Dewan Gibson leaves the Midwest for California, he expects to find a world of breast implants, beer and beaches. Instead he enters a secret and ill-fated romance with a Middle Eastern undergraduate. In this vivid and humorous memoir, Gibson describes his attempts to overcome his forbidden love affair by jumping into an office fling gone wrong (Tijuana Mornings), traveling across the world to Denmark in hopes of meeting "Ms. Booty Mama" (Arhus Ain't for Lovers) and musing over the interracial relationships between his African-American uncles and "rural white women that wore 1980's big bangs and resembled Guns N' Roses groupies" (Too Much Tupac). Toeing the line between stable adulthood and post-college debauchery, Gibson presents a comically honest look at the frailty of modern relationships. Poignant, witty and at times downright hilarious--The Imperfect Enjoyment is a story of toxic relationships and the search for a second chance at love that enlightens and amuses as very few books do.

The Imperfect Enjoyment takes us on a journey from teenage to adulthood and the stops in between.  Very humours at time and at others raunchy, our protagnist worries if he is black enough when he comes from rural Ohio to Nebraska.  He watches the fashions and makes crude remarks about women's body shapes.  He at one time thought he had found his lifemate, but decided before he left college that the relationship was over, especially when she finds him in bed with a younger student.

Embarqing to California, he expects to find some prime booty but meets Haniya and although they do not consummate their relationship, they are passionate for one another.  Thoughout the book and with his escapades, he learns something from each relationship or chance meeting and takes that information to better himself for his future.  This is a story of growing up and all of the hijinks that can happen getting to that point.  Some lines are absolutely hysterical and other times I found myself cringing at either the situation or the wording.  When an author can get a reaction from the reader, I believe they have done something incredible.

The film rights were recently purchased by comedian Joe Clair.


Dewan Gibson is a humorist and author of The Imperfect Enjoyment. His work has appeared in Defenestration Magazine, the International Journal of Intercultural Relations and Hobo Pancakes, among other publications. Prior to pursuing a writing career he earned a master’s degree in intercultural communication and taught at San Diego State University. Dewan is currently conducting health disparities research and writing a nonfiction humor book about working in a community clinic. He can be reached on his blog at http://www.imperfectenjoyment.com/.