The Legend of Michael by Lisa Renee Jones 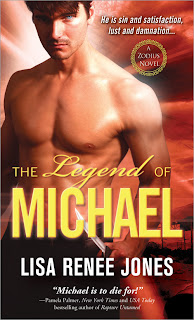 One of an army of human soldiers injected with alien DNA, Michael is a legend within this new race, split between good and evil. Untamable, he has walked on the dark side and returned to the light. Feared and misunderstood, he leaves everything behind, including the one woman destined to be his mate.


Cassandra holds the key to Michael's power, and his pain. With loyalties divided and against insurmountable odds, Cassandra's heart propels her to Michael's side-but can her love do anything but destroy him...

No ordinary woman can control a creature such as Michael, and only one thing is clear-the world will never be the same...

The government told the two hundred soldiers they were being immunized, but they were in fact, injected with alien DNA.  Now, these soldiers are inhumanly strong and fast, immune to human disease and are able to travel with the wind.  Some have also developed other skills.  They are the government's secret weapon. Michael Taylor is one of these soldiers.

Cassandra Powell is the daughter of the man who had the soldiers injected.  Now, she is starting a new job taking over the former head of clinical psychology to properly evaluate the soldiers.  But on her third day, she runs into Michael, literally.  He can't keep his eyes off of her and she finds herself attracted to him.

However, some of the soldiers are deemed too violent and are marked for termination.  Michael is one of them but he and a few of the other soldiers escape and plan to seek revenge upon the government.  Will Cassandra trust her lifebond with Michael or seek the comfort of what she knows?

The Legend of Michael is a great start to a new series.   With all series, usually book one is the vast majority of world building and The Legend of Michael is no exception.   Ms. Jones just a great job of character deveopment and explaining the ways and the whys of the world. The romance was a bit on the slim side, but I'm sure the lifebonds will explore more romance in upcoming books.  Great action, suspense and a splash of romance, tossed with the science fiction and you have a delectable morsel to read!