Season of the Shadow by Bobbi Groover 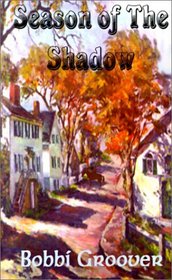 When Buck's parents were killed in a fire, he went to live with his cousin Fletcher and aunt and uncle. However, Buck was jealous of everything Fletcher had and resolved to take it all away from him. He had Fletcher kidnapped and put in an asylum and forgot about him. Over the years, he became the wealthy plantation owner and all that was missing was a wife. He was determined that Fletcher's love, Kyndee, would be his and he used blackmail to attain his desire.


Fletcher was horribly beaten and near death at the asylum. He was given the name of Zachary Brown and that is the persona he took on. Fletcher was pushed to the back of his mind and overtime, he forgot who he was and where he came from. Almost ten years pass before Fletcher gets his memories back and when he does, he is determined for revenge and to take back what was his.

But when Fletcher arrives back in town, looking nothing like he did years ago, he keeps a low profile and goes by Zachary. He wants to get the lay of the land before he decides how to proceed. Unfortunately, Kyndee has recently wed Buck and Fletcher is sure she was behind his kidnapping, although he isn't sure why. He still loves her and is determined to make her suffer or get her back.

But someone in the shadows has another motive. Kyndee's life is in grave danger and Fletcher isn't sure how long he can keep up his ruse before someone's life is taken from them forever. Can he put the hate in his heart to rest to move back into his destined life? Or will he remain the angry and murderous Zachary Brown forever and lose the woman of his dreams?

Season of the Shadow is an amazing and intriguing romantic suspense! I was captured from page one into the lives of Fletcher and Kyndee and didn't stop until the last page. The characters are complex and realistic, lending authenticity to the time of the story. As the plot develops, the intrigue deepens and there are twists and turns keeping this reader entranced. I totally loved it!!