Order of the Seers by Cerece Rennie Murphy Tour

What would you do if you held infinite power in the palm of your hand? Part One of the thrilling Order of the Seers trilogy poses this question within a story that fuses action, mystery, romance, and adventure in a science fiction novel that keeps you at the edge of your seat. Captured and enslaved for their extraordinary gift, a group of individuals, known as Seers, are forced to serve a ruthless world organization that uses the power of the Seers to exploit the ultimate advantage: knowing the future. While a brother and his Seer sister fight to evade the group that hunts them, an unlikely captured Seer, plots his escape from within the organization and sets off a chain of events that will change the world. 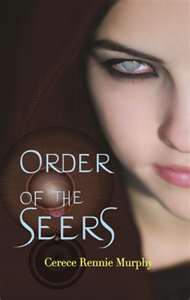 This book is amazing! It's geared toward young adults but adults will find the storyline engaging and pageturning.  The concept that a genetic marker gives some individuals to see the future is powerful.  Especially considering the fact that The Guild locates those people and uses them for their own political motives.  Lilli is a Seer, and her brother Liam will do whatever it takes to keep her safe.  It's the last thing his mom told him before she was murdered.

While on the run, Liam and Lilli run into a pair that escaped The Guild, Alessandra and Marcus. Although there is a blooming romance between Liam and Alessandra, it does take a backseat to their upcoming fight against The Guild.  The pages just flew by as I found myself immersed in this intriguing world.  The characters are very well developed and the dialogue is clever and true to the age of the character.  To me, that is a bonus.  It really lends believability to the storyline.  If you're looking for a new fantasy young adult novel, don't hesitate to pick up Order of the Seers!

ABOUT CERECE RENNIE MURPHY
Cerece Rennie Murphy lives and writes just outside of her hometown, Washington, DC and is currently working on the sequel to her first novel, Order of the Seers. In addition to completing the Order of the Seers trilogy, Ms. Murphy is also developing a children’s book series entitled Enchanted: 5 Tales of Magic in the Everyday and a book on understanding marriage/relationship advice for single women entitled More than the Ring.

To learn more about the author and her upcoming projects, visit her website atwww.crmurphybooks.com.