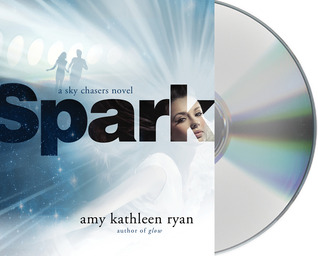 At the end of the first book, Glow, Waverly had returned to her spaceship, the Empyrean with the girls, but was unable to rescue their parents from the New Horizon ship. Now, Waverly spends her time repairing farm machinery and not talking to anyone. She feels bad enough about not succeeding in rescuing their parents, but the kids blame her too.

Kieran has taken command of the ship as Captain and seems to be doing an okay job, but he doesn't like to share in the power. It's his way or no way. He also thinks that everyone should attend his prayer lectures. He's stowed Seth in the brig and hasn't even had a trial for him. He's guilty for mutiny and that's that. When he finds out that Seth has escaped, he blames Waverly.

Kieran has the whole crew believing that Seth and Waverly are working together to take over the ship. Seth investigates on his own, as he can trying to stay hidden, and with some clever ideas, convinces Kieran that there is a stowaway from the New Horizon on board, intent on sabotage.

When the Empyrean takes some direct hits, Kieran knows he must work quickly to rescue their parents or he will lose his position. He hates Seth and Waverly and is determined to prove they are in cahoots with the enemy. Waverly is torn between her old relationship with Kieran and her friendship with Seth. Who is right and who will save them all before it's too late?

Spark is a thrilling page-turner that kept me enthralled. I love the attention to detail and the characters. The world-building is easy to envision and really brings the story to life. Some of the situations are nail-biting and others having this reader curious to how the author would maneuver the characters as the plot twisted and turned. What I didn't like was the huge cliff-hanger at the end!! Now I must wait months to find out what happens next. Don't miss this one - I loved it!

*Read by Ilyana Kadushin and Matthew Brown.  The audiobook is nine cd's and is eleven and a half hours of pure entertainment.  The voices really bring the characters to life

About the Author
Amy Kathleen Ryan reads huge numbers of books and magazines, but has not had success in reading minds, though not for lack of trying. She lives in Colorado with her family, but she daydreams of living in Hawaii or Switzerland. When she is not writing, she can be found walking her dog, cooking in her kitchen, or taking catnaps in her office. She is a graduate of the New School Creative Writing Program. Vibes is her second novel.

*I received this book in exchange for an honest review.