From Goodreads - The trip of a lifetime just turned into the end of the world.

When Jesse crawls out of the wreckage of a subway car and emerges into daylight, he’s greeted by a living nightmare. An unexplained force has destroyed New York City, turning skyscrapers into ash, cutting off all power and communication. Jesse and his new friends, Dave, Anna and Mini are dazed but unhurt. The other survivors are not so lucky. Every human being they encounter is infected, gripped by an unquenchable thirst that drives them to monstrous acts of violence.

Somehow, Jesse has to escape. But first, he has to stay alive. 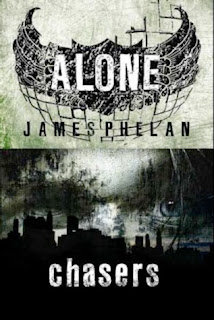 Wow! Chasers is such an enthralling story. From the moment I picked it up I could not stop reading until I had finished every single page. It's fast paced and flows briskly with lots of suspense. There were a few times that I was slightly confused by things that were said or done but it all comes to light in the end of the story. Boy what an ending! I was totally shocked and amazed by the ending. Looking back I can't believe I didn't know where it was heading but then again isn't that what you want from a book? For the ending not to be given away but that you were carefully lead there the whole book?

I was grateful there wasn't a lot of gore despite the subject matter. In fact I normally would not read a story about such things so I think that speaks volumes about just how amazing this book was. It definitely surprised me that I liked it so much. I do not want to give away any of the plot but I will say Chasers is very thought provoking and will have you thinking about what happened well after you have finished the book. I think some readers may wonder why we never find out exactly what happened to the city and its people in this book but if we had, I don't know what the point of reading the rest of the series would have been.

So I for one am anxious to read the rest of this series and see where Jesse goes from here. I would definitely recommend this to readers of YA novels and lovers of post-apocalyptic worlds. I am a very light weight when it comes to death, gore, and horror and this one only slightly pushed my comfort line so I think it would be okay for most readers. But you may want to consider the subject matter before reading if you are easily disturbed.

*I received a copy of this book in exchange for an honest review.  April
Posted by Minding Spot at 1:08 PM