From Amazon - Sean has spent twenty years in Third World war zones and natural disaster areas, fully embracing what he’d always felt was his life’s mission. But when burnout sets in, Sean is reluctantly drawn home to Belham, Massachusetts, the setting of Fay’s much-loved Shelter Me. There, he discovers that his steely aunt, overly dramatic sister, and quirky nephew are having a little natural disaster of their own. When he reconnects with a woman from his past, Sean has to wonder if the bonds of love and loyalty might just rewrite his destiny. Completely relatable, The Shortest Way Home is another perfect serving of a slice of life from the irresistible Fay 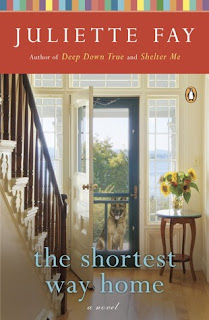 Since Hodgkins's disease is genetic, Sean grew up with the black cloud looming over his head.  Determined to make his life matter, he spends his time helping others.  However, when he gets the word that his aging aunt has dementia and needs help, Sean comes to the realization that at his age, he probably isn't going to get the life killing disease.  He begins to wonder how much he has lost if he hadn't devoted his life to others.

When he arrives home, his aunt isn't in a good place - her disease is escalating and his nephew isn't being cared for in the way he should be.  He knows that he is going to go back to helping others - it's all he knows.  But first, he wants to make sure his nephew Kevin is being cared for properly and that his aunt has the help she needs.  What he doesn't expect is for his goals to change.


With an engaging storyline, unforgettable characters and great writing, The Shortest Way Home will sweep you up and not let go.  I found myself immersed in their world and at times, humored, saddened, uplifted and heart-warmed.  I loved this book and well recommend it!

*I received a copy of this book in exchange for an honest opinion.

*Fill out the Rafflecopter below
*USA & Canada Only
*Contest ends November 14, 2012


a Rafflecopter giveaway
Posted by Minding Spot at 12:12 PM