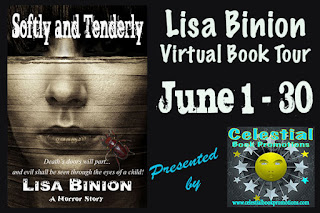 1. How much research did you have to do for your novel, Softly & Tenderly?

My mom died when I was eight years old, so I didn’t have to research how the death of a parent affects a child.  I did however have to research what happens to the body after death, and I had to do some research on funeral homes.
2. Death is always a sensitive subject, but more so with a child. How did you treat this subject matter differently than anything else you've written?

The death of a parent is really hard on a child.  Bad dreams seem to always come.  I found that the other kids at school treated me differently when I went back after my mom’s funeral.  Ones who haven’t experienced it just don’t seem to understand.  They seem to be afraid to even talk to you much less associate with you in any way.  The beginning where my dad ran down the stairs screaming for an ambulance really happened.  That morning is forever burned into my memory no matter how hard I want it to float away.  The rest is pure fiction, but I know firsthand how a child would react in such a situation.

I don’t know that I really treated it any differently than anything else I have written.  I didn’t set out to show how the death of a parent makes a child feel.  If I managed to get that across, it was a total accident.  There are still times that I cry over mommy’s death all those years ago.  I wrote this to help me deal with seeing my mother breathe as she lay in the coffin.  I know that was all in my head, but it wasn’t in Lori’s head.
3. Is it difficult to get a full story in such a short novel?

Softly and Tenderly is just the beginning of a much longer story.  I never really planned on publishing it in the first place, but when I told Rebecca what I had written, she wanted to read it.  Once she read it, she decided that it needed to be published.
4. What are you reading right now?

I am reading The Children of Hamelin.
5. Are you working on a new story? If so, can you tell us anything about it?

I am working on the next part of Softly and Tenderly.  Lori has so much more in store for her.  The beetles will not go away because they have so much more for her to learn.  Her life is about to get very interesting.

I’m also working on Whisper.  That is a novel about one very unique spider who befriends a young girl about to commit suicide.  Renny appears to be friendly, but does she have ulterior motives?

And I’m working on my second confusing words book.  The first one will be published by next month sometime.
6. Do you have any suggestions for anyone who is trying to get published?

Never give up.  Be determined, and write, write, write.  Not every publisher will like your story, but there is one out there who will.  If you have to, publish it yourself.  There is always room for another good writer.

“Mom died in her sleep last night.” Those are terrifying words for a child to wake up to. The beetle that falls off the stretcher and stares at her is only the beginning one of the strangest and most frightening times in Lori’s life. Death is not a pretty thing, especially not when the funeral is to be at the Lights Out Chapel and Crematorium.  Once she walks into the funeral parlor, she experiences things that no little girl should ever have to experience. No one is acting normal. No one can see what is going on. Is Lori the only one who sees the blood oozing from the pictures of Jesus on the cross? Doesn’t anyone else see the beetles? Is Lori hallucinating when she sees her mom sit up and hears her speak? There is absolutely nothing soft and tender about what happens to Lori.  From her overly morbid piano teacher to the creepy preacher and a father that just isn’t acting like himself, Lori is surrounded by people and things that hint of something bizarre. Once she leaves the Lights Out Chapel and Crematorium, things will go back to normal. Or will they?

About the Author - Lisa Binion is a writer, editor, and wife. She makes her home in the beautiful state of Kentucky. Her two children are now grown, but she has been blessed with two beautiful grandchildren, Tyler and Zoey. Her family also includes four dogs, four cats, and two goats.
As the Fiction Writing Editor for BellaOnline, she writes articles, reviews fiction books, and interviews fiction authors. She is also an editor for Silver Tongue Press and Edit 1st. In her spare time, she attempts to clean house and relax.  You can find her at https://www.facebook.com/pages/BellaOnline-Fiction-Writing/125143070846792., http://www.silvertonguepress.com/, and http://edit1st.com/.


a Rafflecopter giveaway
Posted by Minding Spot at 12:30 AM