The Quest to Control the Power of the Seers Continues…

After successfully destroying the Guild’s Purification Center in Chicago, The Lost Seers, led by Joel Akida and Lilli Knight, embark upon a world-wide mission to save their kind from the tyranny of the Guild and unveil their greatest weapon – The Restoration Project. Developed in secret, The Restoration Project has the potential to awaken the supernatural ability within every man, woman, and child on earth and bring down the very foundation of the Guild’s power and authority.


But the Guild has other plans. Driven by the necessity for control, Crane Le Dieu creates The Red Order, a new league of clairvoyants whose sole purpose is to hunt down and annihilate the Lost Seers. Without the Guild’s mind-controlling drugs, The Red Order is able to develop its gifts far beyond the capacity to see the future, honing their skills to become the ultimate threat against the Lost Seers. But the question remains – will the power of The Red Order be enough to defeat them?


The Red Order continues the epic battle for freedom which began in Order of the Seers, revealing the secret motives behind an organization that exists to exploit and a renegade movement that seeks to usher in the next phase in human evolution. 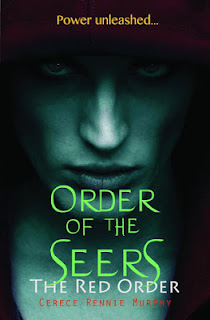 Order of the Seers is the first book in this thrilling series and I devoured it.  I was really excited to get my hands on a copy of the next installment, Order of the Seers: The Red Order.  Murphy does it again!

In a cleverly crafted world, Joel and Lilli are still fighting the good fight - to bring down the controlling tyranny of the Guild.  They have a new power, one that can help them be successful in their mission.  A way to wake up the supernatual seer in everyone.  But Crane is always one step ahead of them, especially with his new Red Order out to eliminate the seers.

He's also completely lost his mind, turning to beast and hunting the lost seers so that he may steal their sight for his own.  Joel and Lilli aren't the kind to give up easily though and will fight with everything they possess to free their kind from the Guild.

With page-turning suspense, secrets revealed and noteworthy characters, Order of the Seers is a must read for any supernatural fantasy fan.  Tense, keen and gripping, Order of the Seers: the Red Order is highly recommended! You don't need to read the first in the series to follow along, but I'd recommend it so you get the full experience.