In this finale of the darkly gothic Mirror Sisters trilogy, one twin fears her reunion with sister dearest—from the legendary New York Times bestselling author of Flowers in the Attic and My Sweet Audrina (now Lifetime movies). For fans of Ruth Ware (The Woman in Cabin 10) and Liane Moriarty (Big Little Lies).

As identical twins, Haylee and Kaylee Fitzgerald have always done things in exactly the same way. Under their mother’s guidance their every outfit, every meal, and every thought was identical.

But now things are different.

With Kaylee back at home after her sister's betrayal, her life has been turned inside out. Both her mother and Haylee are away and Kaylee’s alone and more lost than ever. Her father suggests going to a new school where she can have a fresh start, and where no one will know about her dark past. But if Kaylee knows her sister at all, she knows that her twin isn’t through with her yet… 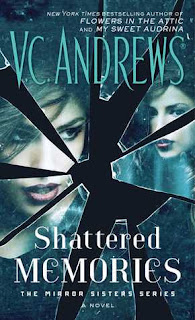 Shattered Memories is the amazing finale to a dark and captivating series! If you have not read the previous books this review will contain major spoilers!

Just as beguiling as the first two books of the trilogy, this one picks up with Kaylee trying to piece back together her life after being rescued from the abduction that her very own twin sister set in motion. Haylee is being treated at a mental hospital and Kaylee is set to start at a new private school for a fresh start.

I assumed there would be a trial where Kaylee would have to face her captor and rehash her horrifying experiences but unfortunately that was not featured. I would have liked to see that as that seems like the next logical step of the story and also to hopefully answer a couple of my lingering questions.There was however the fact that Kaylee would soon have to face her sister for the first time after confirmation that she in fact was behind the whole abduction. Needless to say the tension was high and I was anxious to see how things played out.

Kaylee also has to deal with the fact that her mother is still in a sensitive state of mind and wants everyone to not mention anything that happened and to pretend Haylee is just away at school. Aside from the difficulties she faces within her family Kaylee's story also features this other life she has made for herself at school. She meets new friends but has to keep them at a distance so as to not let them find out who she really is and what she's been through. She also meets a boy and it's interesting to see how she deals with flashbacks of her imprisonment and how she tries to heal.

They bond on some strange wounded level and it's nice that someone else gets it. There wasn't quite as much of a showdown with Haylee as I pictured but ultimately I think the ending was appropriate. Shattered Memories is definitely a page-turner. Highly recommended!

*I received a copy of this book in exchange for an honest review. April
Posted by Minding Spot at 12:39 PM