Weight of the World: the prequel by A.D. McClover

Weight of the World is the first of a 2-part series featuring Stephon St. Claire aka Saint. Saint is an ambitious, self-motivated dreamer who sees the world for what it is; the haves and the have-nots. His three-year stint in prison for selling cocaine within 1000 feet of a school zone left him feeling abandoned, angry and alone. With the mounting pressure of raising two infant sons that were both born while he was incarcerated, Saint needs to come up with a new master plan for his life.

Blessed with the gift of gab he trades in the drug game for the underground world of “managing escorts”, which some may refer to as pimping. With his main girl Amanda by his side, things start to look up.

The money is flowing but it’s too much for one man to handle so he solicits the help of his first cousin Ant. On the way to achieving his ultimate goal of providing a better life for his kids and of course himself; greed, envy and back-stabbing enter the picture. Will Saint rise to the occasion or crumble under pressure? 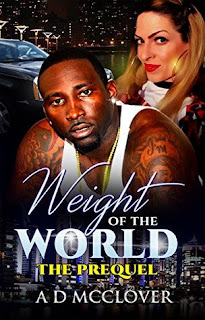 The author is serving time in a Florida prison and the story starts out like a long letter from your favorite inmate. I originally struggled with how every other sentence ended in an exclamation point. The story revolves around Saint, who gets out of jail, meets Amanda the first day who agrees to pack up all her belongings and go with him on the road. They go to Atlanta where they get the hotel clerk to quit her job to join Amanda who’s working at a gentlemen’s club while Saint manages their money. Saint then gets a third girl working at the club to join them on their travels after one conversation.

It was at this time that I decided to suspend belief, stop finding the holes in the story and just go with the story. And what do you think happened? Yup, I enjoyed the book. Once I accepted that although the author’s bio states that “his graphic and startling tales are all actually based on his life and the life those he knew in the streets”, the ‘re-telling’ are just the highlights with no substance whatsoever.

I can see how some details can be true to life but it’s also obvious that the story is based on fantasy. A fantasy from someone serving time All in all, I am not saying that this not a good book, it just needs to find the right audience. AND I wouldn’t be completely opposed to reading his sequel “The World I Once Knew”. McClover has the talent and with some coaching once he gets released, I expect him to become a very successful author.

*I received a copy of this book in exchange for an honest review. Roberta
Posted by Minding Spot at 12:37 PM